To help support the future reconstruction efforts, Hexagon and Leica Geosystems has made available the laser scanning data of Notre Dame captured by the late Dr. Andrew Tallon (1969-2018).

In 2013, Leica Reporter 68 featured the work of Dr. Tallon in capturing the majesty of Notre Dame through laser scanning.  The case study and additional images can be downloaded here. 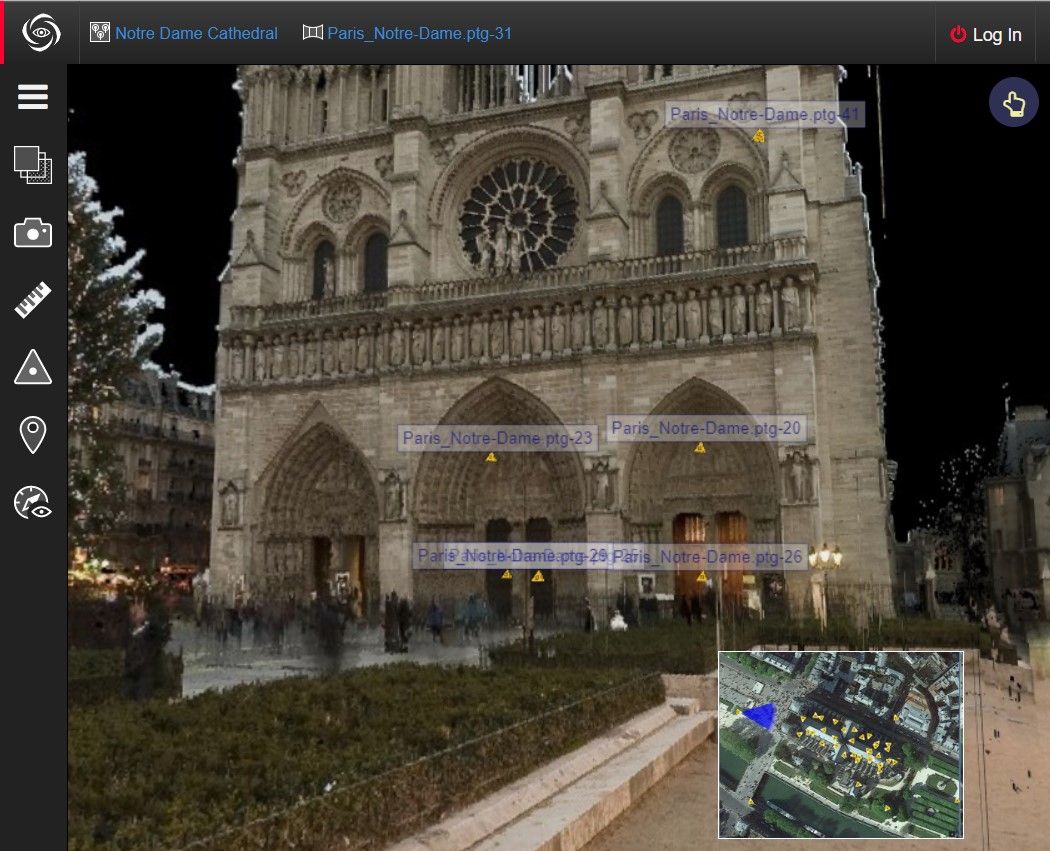 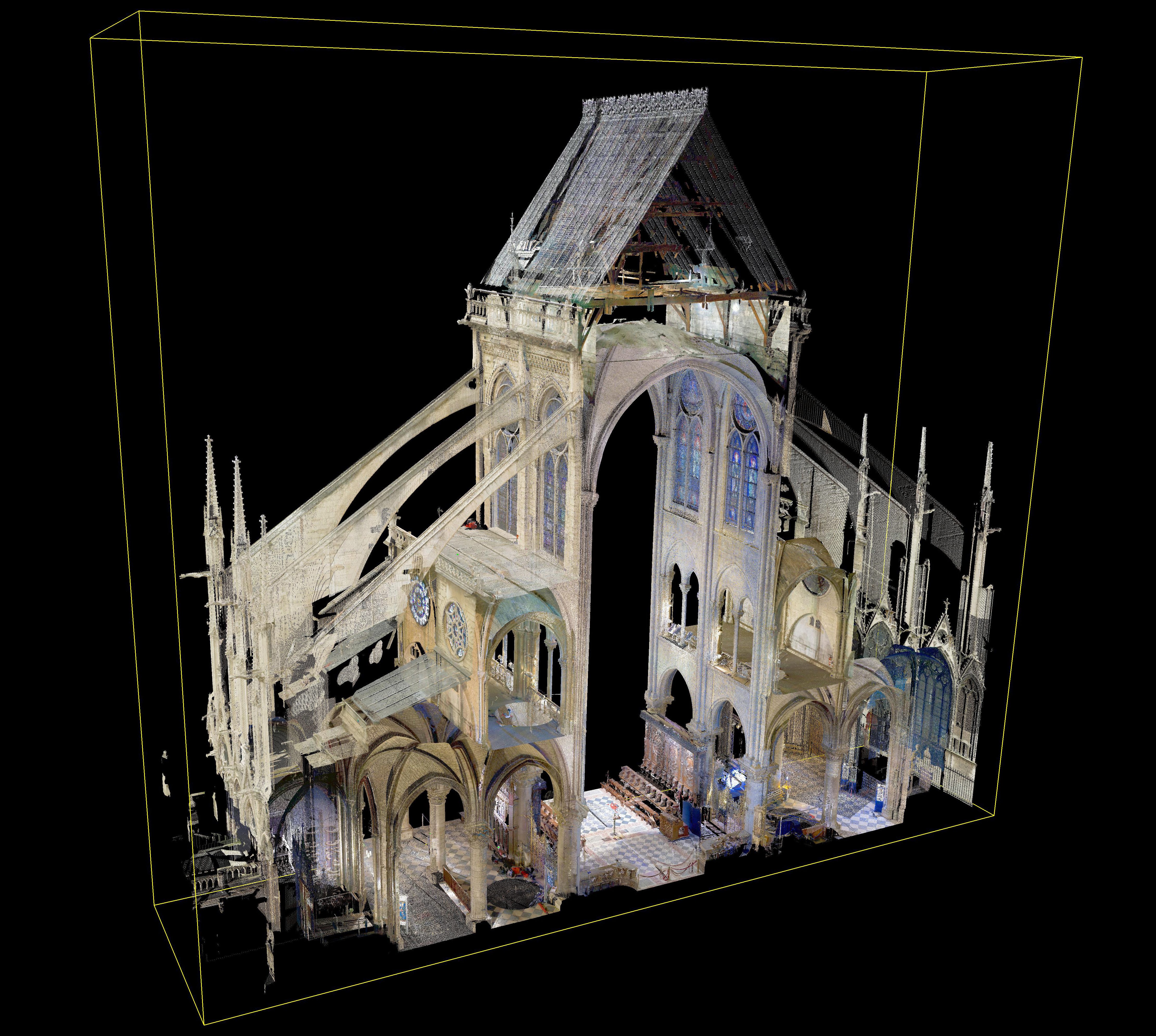 The advent of Gothic art in the 12th century marked the  start  of an  extraordinary  architectural adventure in the Middle Ages. Cities in France  –  and  then  throughout  Europe  –  vied to build the  most  perfect  image of Heaven  on earth.  The  master  builders of Gothic architecture conquered hitherto unknown heights with feats of technical bravado, as astonishing today as they must have  been  then, but left no hints, other than those hidden in the buildings themselves, as to what their process of design might have  been.   Traditional means of understanding Gothic structural design using modeling are fraught with conceptual and technical challenges. Andrew Tallon, Professor at Vassar College (New  York) and specialist in Gothic architecture, adopted 3D laser scanning technology to circumvent these problems to read the stories of the builders directly in the stone and mortar of the buildings, with millimeter precision.

Structural models have been used since the 1960s to explore the  questions  that art  historians  have long asked about Gothic buildings. However, the lack of precise methods of measurement,  the assumptions necessary to create a workable model and the lack of documentary evidence have rendered their conclusions too divergent. The invisible forces affecting the walls have inspired multiple theories based as much on intuition as on material evidence. It seemed time to tell the story of Gothic buildings anew.

In trying to achieve this goal, Andrew Tallon sought funding from the Samuel Kress Foundation to under- take a large-scale laser survey at the cathedral of Bourges in 2008. By creating a highly accurate spatial map of  the building it became possible to examine, in the finest detail, every unintended departure from rectilinearity. Gothic buildings, like most buildings, were constructed along the plumb-line.  The parts of the building that are no longer plumb were thrust out of line by the combined forces of the vaults, arches and wind - direct evidence of invisible forces working on the walls. By quantifying these movements using 3D laser scanning, with a precision of several millimeters, it has become possible to speak with confidence about  what  has actually  happened  in the  building, and what decisions were made by the builders during construction to tame these unwanted deformations. Evidence from the cathedral of Bourges, for example, reveals that its  builders  actively  struggled  to keep the piers in perfect alignment by adjusting the posi- tion of subsequent layers of masonry; they eventually resorted to installing iron ties, hidden above the vaults, to arrest the tendency of the vaults to push the building out of plumb.

Andrew  Tallon's  interest  in 3D laser scanning technology goes back to 2001 when his dissertation director, Columbia University Professor of Art History Stephen Murray, teamed up with Peter Allen, Professor of Computer Science at Columbia, to produce the first laser scan of Beauvais Cathedral  using one of the first Cyrax laser scanners. Nearly 10 years later, Tallon, assisted by Paul Blaer, a colleague of Allen’s, used one of the first Leica ScanStation C10s available in France to produce a high-density scan of the cathedral of Notre-Dame  in Paris in the context of a documentary  that aired in Europe on the television station Arte in 2011. After having seen the data that other 3D laser scanners produce, Andrew Tallon is convinced of  the superiority of the C10 in terms of long range and accuracy. The question  of  speed is also of critical importance. The cathedral in Paris is visited by approximately 13 million  visitors per year (an average of  more  than 30,000  people  per day): time  spent  scanning the  entire  monument  with an area of 4,800 m²  and a total length of 128 meters had to be reduced to a minimum so as not to disturb both the daily liturgy and the flocks of tourists.

Thanks to advances in technology such as the onboard  interface of the Leica ScanStation C10 and sophisticated new functions in the Leica Cyclone software – particularly the advances in cloud to cloud registration – Tallon was able to be far more productive during his latest missions. He explains that he is now able to produce twice as many stations including target referencing  with the Leica ScanStation C10 as he had with a Leica HDS3000. For example, he and his team were able to complete the scanning work over fifty stations and more than 1 billion  textured data points – at Notre-Dame in only 5 days. He looks forward to being able to work with the newest Leica Geosystems laser scanner, the P20, in the context of his research, given its impressive improvements in acquisition speed.

“This type of work simply would not have been pos- sible before the 3D laser scanner. Manual measurement would have required extensive scaffolding and months of work to accomplish – not to mention the inevitable errors due to imprecision,” states Tallon.

Tallon emphasizes that the importance of laser scan- ning lies well beyond  its  ability  to simply measure. “The consequences of laser scanning,” he says, “are equally  far-reaching  in  terms  of  representation.  A three-dimensional laser-generated model allows one not  only  to peer  into the  building  but  also to dis- place it, measure it and, most importantly, immerse oneself in its spatial and structural matrix. Both the structural skeleton and the evidence of its malfunction, the deformation produced by the push and pull of its constituent elements, are made immediately apparent  to expert  and lay audiences alike – a picture, in this case, well worth a thousand words.”

Andrew  Tallon joined  the  faculty  at  Vassar College (New York, USA) in 2007 where he teaches medieval art and architecture. He is a specialist in Gothic architecture  and has published  a number of articles  on the subject. He is currently writing a book titled The Structure of Gothic, which will feature the research undertaken with Leica Geosystems laser scanners. His 3D laser scanning  and  research  were  featured in a feature-length  documentary  produced  by Arte, Les cathédrales  dévoilées, which aired on television in  2011.  Most  recently,  his  book on the cathedral of  Paris, co-written  with  Dany Sandron,  to be pub- lished in the spring of 2013,  tells the history of the construction of the building in visual terms. The pri- mary illustrations were created from the laser scans acquired in 2010 and 2012.

Professor Andrew J. Tallon, died Friday, November 16, 2018.  Professor Tallon was born on March 12, 1969 in Louvain, Belgium, the son of Andrew F. Tallon and Mary Beth Tallon Vander Vennet. He was educated at Princeton and Columbia Universities, and joined the faculty at Vassar College in the Department of Art in 2007 teaching  medieval art, architecture and pre-modern acoustics.  He received a Ph.D. from Columbia University with distinction, M.A. from the University of Paris-Sorbonne, and B.A. with highest honors from Princeton University.

Andrew Tallon was esteemed worldwide as an innovative scholar of French Gothic art and architecture, one who introduced new digital techniques to the analysis and re-creation of the spatial archaeology of medieval buildings. In all his work, he was an inspired and generous educator who brought the past to life in vivid and meaningful ways. His second book (in progress) is entitled The Structure of Gothic. His first, Notre-Dame de Paris, was coauthored in French with Dany Sandron and published in 2013; an English edition is under contract with the University of Pennsylvania Press. He received research funding through a grant from the Samuel Kress Foundation for a study of the cathedral of Bourges and a five-year grant from the Andrew Mellon Foundation for the web-based project Mapping Gothic. His research was featured in an Emmy-nominated PBS | Nova production, Building the Great Cathedrals, which has regularly aired nationally since 2010, the Arte documentary Les cathédrales dévoilées, which first aired in Europe in 2011, in a 2013 edition of Des racines et des ailes on France 3, and on National Geographic as part of the Innovators series. Tallon was a former director of the International Center of Medieval Art and of AVISTA, and was co-founder and a director of the US-based charitable association the Friends of Notre-Dame.

He is survived by his children; Ambrose,12; Augustin,10; Gabriel, 9; and Anatole, 5; and his wife, Marie Tallon-Daudruy. He is also survived by his parents; his sister, Clare, and her husband, Dan, and their children; his brother, Barry; and many other loving family members, devoted friends, former colleagues, and students.

Obituary from The Poughkeepsie Journal here

Centimetre-grade surveying for everyone, at a great price