Futureproofing the Workplace with Wearable Technology 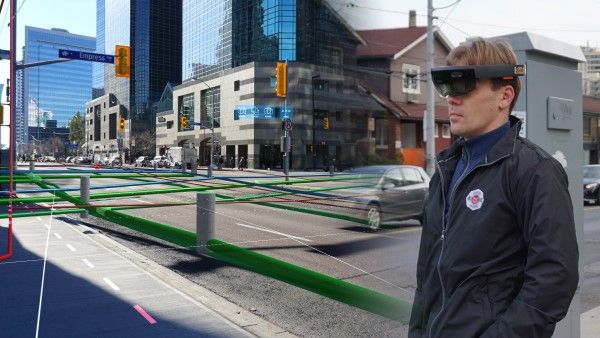 CR Kennedy Survey is proud to partner with vGIS, a Canadian software house that is a leader in augmented reality solutions. vGIS transforms traditional GIS data into augmented reality displays and holograms overlaid on onto the view of a physical job site.

Utilise your Android or iOS smart device. or even the Microsoft HoloLens—to “visualise” underground utility infrastructure within a site or work area. Water pipes, sewage systems and gas and electrical lines appear as a natural extension of the real world.

C.R. Kennedy are also the exclusive Australia distributor of Leica Geosystems, a global leader in precision positioning equipment. The integration between vGIS and high-accuracy GNSS make it an ideal solution for the management of underground utilities. In vGIS for Utilities   you pair the Leica high-accuracy GG04 Plus GNSS smart antenna with vGIS to create instant and accurate awareness of any invisible underground asset, saving you time and helping you avoid costly mistakes by correctly identifying underground utility assets with highest confidence.

FUTUREPROOFING THE WORKPLACE WITH WEARABLE TECHNOLOGY

Based solely on the impressive capabilities of today’s smartphones and tablets, it would be easy to believe that these devices are the technology of the future; that while they may go through various improvements, they will always be around. Interestingly, the leading players in the smartphone industry don’t seem to think so. In fact, it appears they are working hard to ensure it isn’t so. With some of the world’s largest technology companies already focusing on developing wearable devices that will replace smartphones, analysts are convinced that wearable technology is the future.

And not only will those wearable devices be hybrid computers that combine the functions of multiple gadgets currently in use, they will feature sophisticated augmented reality (AR) capabilities that are better than anything on the market right now, enabling them to transcend personal use to become key features of workplaces.

A new generation of wearable technology devices like AR-capable headsets will take the place of the smartphone, not only as the most sought-after personal gadget, but also as an indispensable productivity device. In doing so, wearable technology will eliminate the need for constantly looking down at a screen, since the whole world around us can be transformed into one giant screen.

Wearable technology is not new; it’s been around for many years and the term is used broadly to cover all electronic devices that can be worn directly on the person or attached to clothing. Today, the most common are fitness trackers and smart watches.

However, some experts believe that wearables are likely to see a big boom soon, driven not by individual consumers, but by companies seeking to improve productivity. For example, half of 1,100 global enterprises surveyed by Zebra Enterprises indicated that they plan to deploy wearable technologies by 2022. ABI Research on its part, forecasts that enterprise wearables will surpass $60 billion in revenue in 2022, driven in large part by business use.

So, the evidence strongly suggests that the workplace of the future will be characterized by widespread use of wearables like headsets. It would be foolhardy however, to pretend that the path will be a straight-forward or easy one. As with any significant change that occurs in the workplace, there will be hurdles on the way, many of which will take years for large organizations to overcome. For example, we can expect resistance from stakeholders who fear they will be negatively impacted, either through loss of employment or the challenge of learning to work with these new devices. In the past, there has been resistance from employees who viewed such technology as cumbersome. And as other research has shown, there is also concern from employees worried about privacy issues and the possibility of surveillance and data breaches.

THE BUSINESS BENEFITS OF WEARABLE TECH

Wearable technology holds plenty of promise for businesses and employees. For example, in organizations where a significant number of employees can benefit from hands-free, frequent and immediate access to information as they work, wearable headsets can improve efficiency. The combination with augmented reality can be particularly beneficial where the worker’s powers of perception is an important part of the job, according to Deloitte. By overlaying contextually relevant information such as instructions and explanations in an employee’s field of view, wearables like headsets can enable the employee to work faster and with better quality. Similarly, the rich visualization capabilities afforded by wearable devices can augment employees’ design and data analysis abilities and make collaboration easier and more cost-effective.

A concrete demonstration of these benefits is best seen in the vGIS system, which runs on both flat-screen and Microsoft HoloLens. Utility workers wearing the headset get access to an augmented reality display over the image of a physical job site, allowing them to see the precise location of underground and over ground assets like water pipes, gas lines, electricity cables and streetlights. With their hands free, they can carry out other tasks and collaborate with other stakeholders while accessing relevant information in their field of view through the headset.

Significant changes in how clients are using this technology illustrates the general increase in uptake of wearables among businesses.  Just over a year ago, only one in 10 vGIS client had a HoloLens already, and only one in five asked about HoloLens. Today, while most users currently use vGIS on traditional phones/tablets, every third client already has a HoloLens in-house to test the program on, and 65% of potential clients ask about HoloLens or wearable device support. These organizations are demonstrating increased awareness of the fact that wearables are the future and that they need to ensure that they are ready.

FUTUREPROOFING YOUR COMPANY FOR WEARABLES

All the pointers are that wearable technology will soon be a significant part of doing business. Savvy companies will stay ahead of the curve by preparing for this technology today. Such companies recognize that, far from making workers redundant, wearable devices will improve employee productivity and efficiency. They also recognize that it takes time to incorporate new technology into business workflows and operations. As a result, they are proactive in preparing their workforce and operations for the future, ensuring that their employees not only see the advantages, but that they are able to leverage these devices to improve work.

vGIS’ experience in this field has been that wearable technology is applicable across a range of use cases and industries, therefore all companies ought to explore for themselves, where the value lies for their business. But being proactive is key. To stay ahead, companies must begin to assess the potential that wearables hold for their businesses even before it goes mainstream.

CR Kennedy survey is the exclusive supplier of vGIS Utilities which transforms traditional GIS data into augmented reality displays and holograms overlaid on onto the view of a physical job site.

The #1 augmented reality system for GIS. Designed specifically for municipalities and public utilities, vGIS Utilities uses augmented reality to display infrastructure—pipes, lines, cables and other assets—in-field and in real time.

Trade In and SAVE with Leica